By the time we awoke Queen Victoria had completed its transit up the River Elbe and was moored at the Altona Cruise berth. We had breakfast delivered to our suite and were ready to walk ashore by 10am. Cunard had arranged shuttle buses to the city centre, but we chose to walk which is generally our preference when in a port that is walkable.

It was a pleasant, flat walk along the bank of the Elbe into the city centre. Enroute there was a large street market that actually looked like it was winding down, but judging by the people carry fruit, vegetables and other items away it had been successful day for the sellers. It centred around the old Fish market hall, where today there was a band playing, and several beers selling snacks and beer – which was doing a good trade for 10.30am on a Sunday morning. 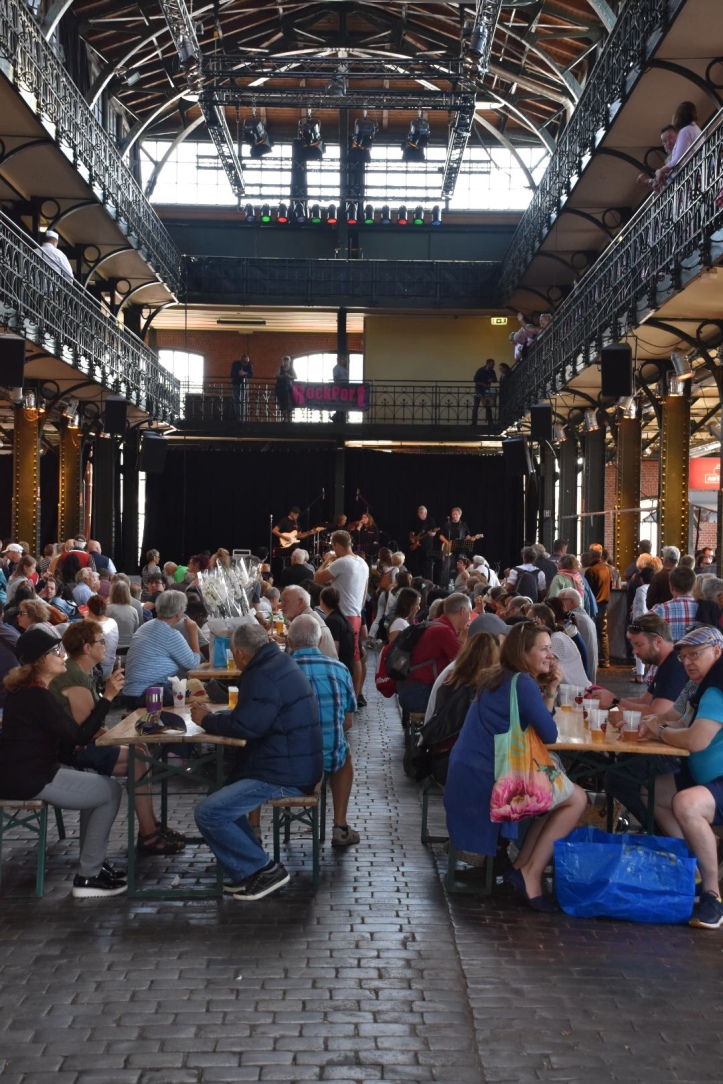 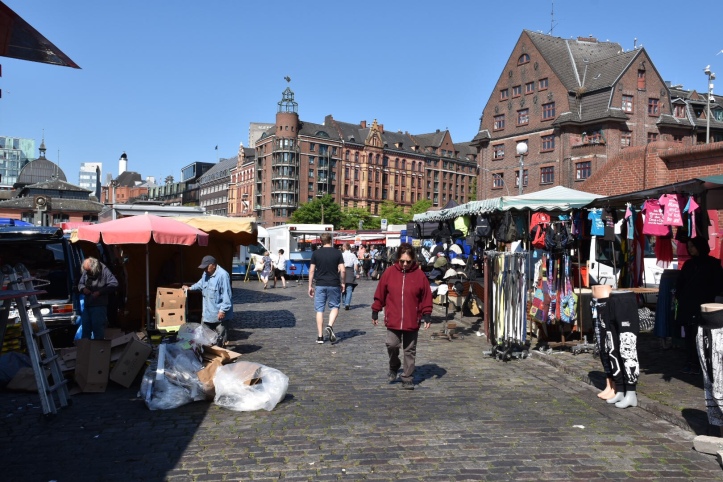 We headed towards St Michaels church initially and bought tickets to enter the crypt and tower. Sunday service was in progress so we were unable to go into the main church itself. The crypt was interesting, if only for a brief history of the church which seemed to have suffered a number of fires (well at least two, the last in 1905which destroyed the tower, with remnants of the bells and weather vane which landed on the pavement on display. The crypt is also fairly unique apparently for the style of burial vaults. 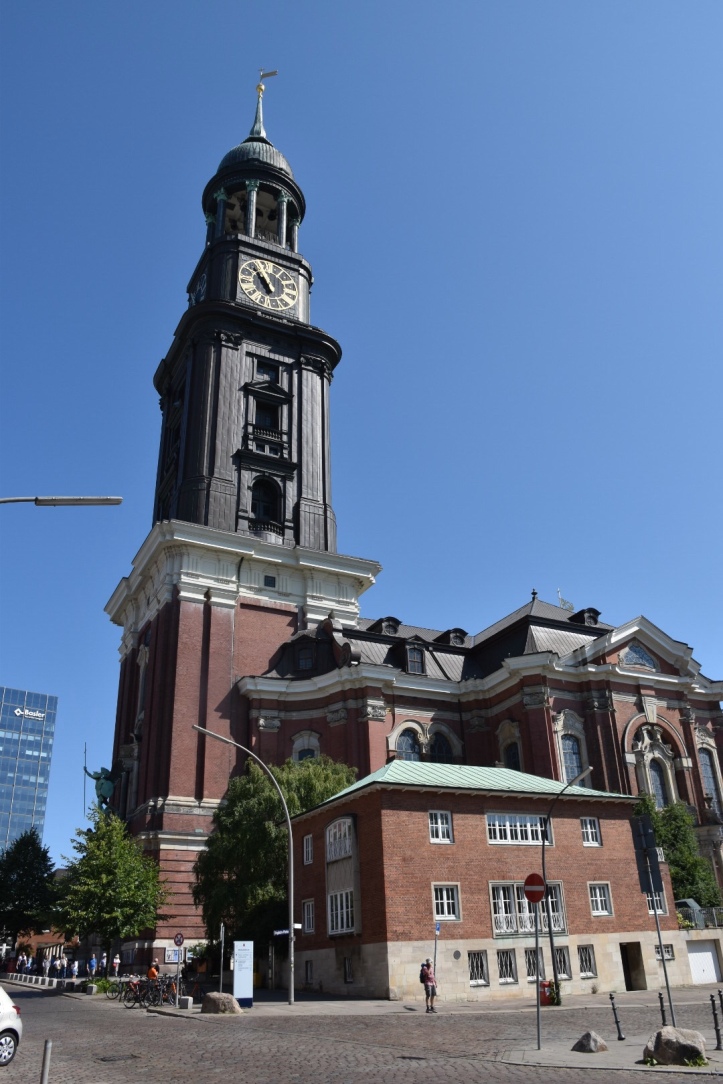 After the crypt we climbed the 500+ steps to the 83m high observation deck where we were rewarded with 360 degree panoramas across Hamburg. 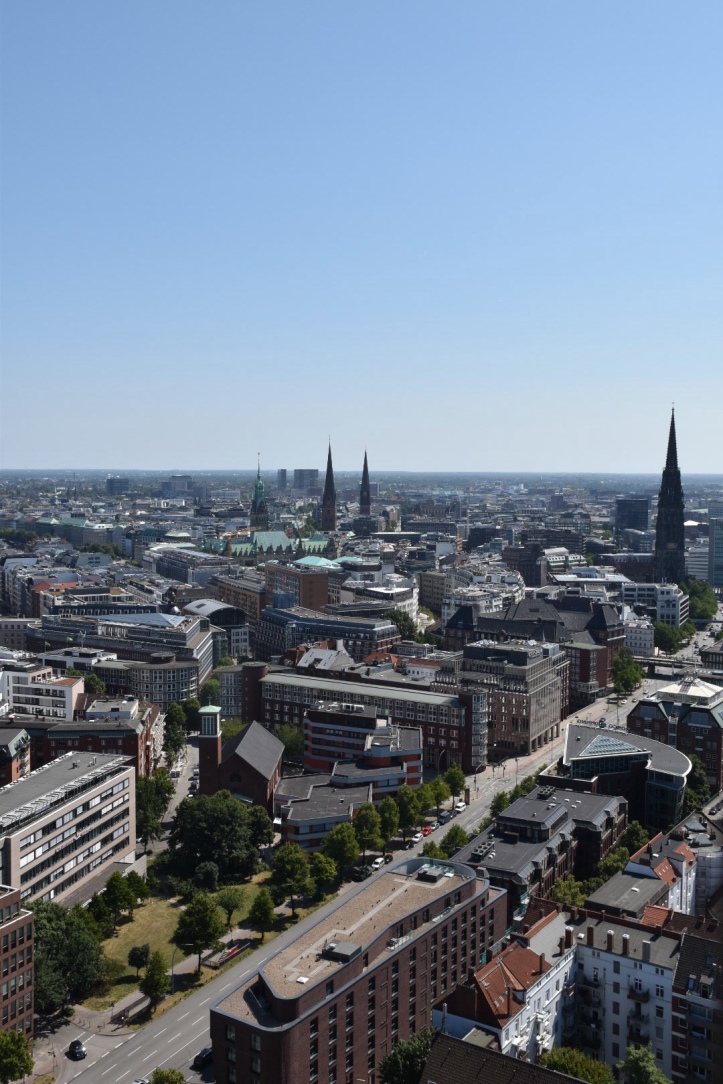 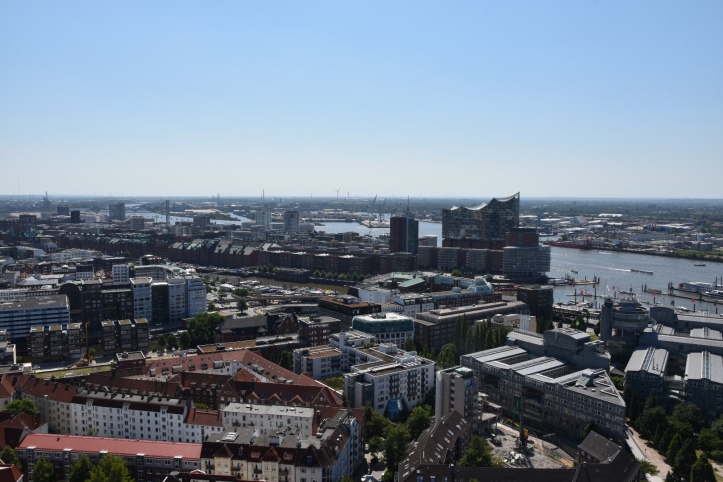 We then wandered further into the city to close to the town hall. You can go inside (apparently has more rooms than Buckingham palace) but we decided to have a coffee first at Arakaden Cafe on the Alsterarkaden (a historic covered walkway overlooking a river. We also indulged in a slice of (apparently local traditional) Rhubarb crumble cake (Streuseltorte), and Lubecker Nuttorte (a walnut and marzipan cake). Delicious.

Revived, we then headed down towards the old dock area. It’s clearly an area that’s been redeveloped over recent years, and very pleasant to walk around. Our target was the Miniature wunderland which houses the worlds largest model railway…..couldn’t miss that! It does get very busy and they have timed tickets. Because we hadn’t booked they said it could be a 70 minute wait until our number was called (they have a waiting area set up with free light drinks etc), but after probably only 20 minutes or so we were called forward. The model railway is set up over 2 floors (most of it in one level except for the Switzerland section to fit in the mountain scenes!), and has various different zones to it. Hamburg was recognisable by the dock setting; the US was represented by a Rocky Mountain scene, as well as a pueblo scene, plus also a scene which seemed to merge Las Vegas, with Cape Canaveral, and the Florida keys amongst others. 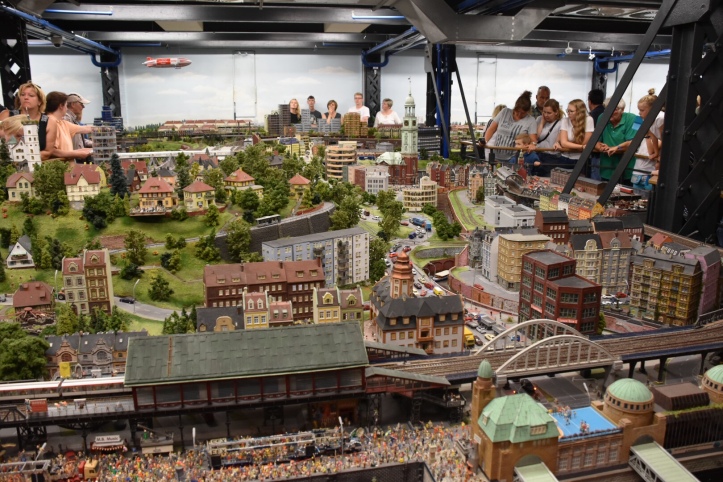 M told J, model railways aren’t necessarily about being wholly accurate. The detailing was however wonderful, with thousands of miniature characters and various scenes set up – there were a lot of police/fire events going on. There is also an airport with planes landing, taking off and taxiing. 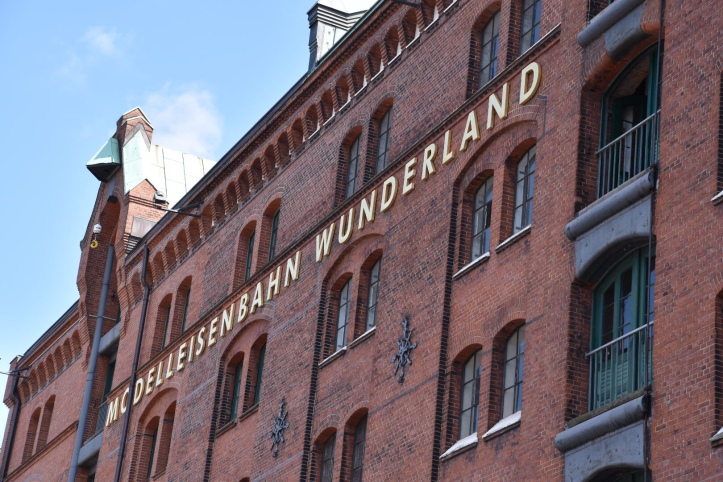 Our exploration of the Minature Wunderland complete we walked back to the ship along the banks of the Elbe which was busy with people enjoying the Sunday afternoon sunshine. All in all, we walked about 10 miles, and if Apple Watch is to be believed climbed some 40 flights of stairs.

Queen Victoria pulled away from the berth at about 6pm, which meant we had an evening of watching the countryside pass by as we sailed down the Elbe back to the North Sea. The first part (on our side of the ship at least) was very residential with a lot of very large grand looking houses overlooking the water, with various pontoons and even beaches along the way – all with quite a number of people watching, and waving at us sail by. At on point we passed Schiffsbegrüßungsanlage Willkomm-Höft (literally, Ship Greeting Station Welcome Point where they blasted our the British national anthem and dipped flags, which the ship returned with a couple of blasts of the ships whistles. Apparently they do this for all ships passing by (although national anthems reserved for ships over 1000 tons). 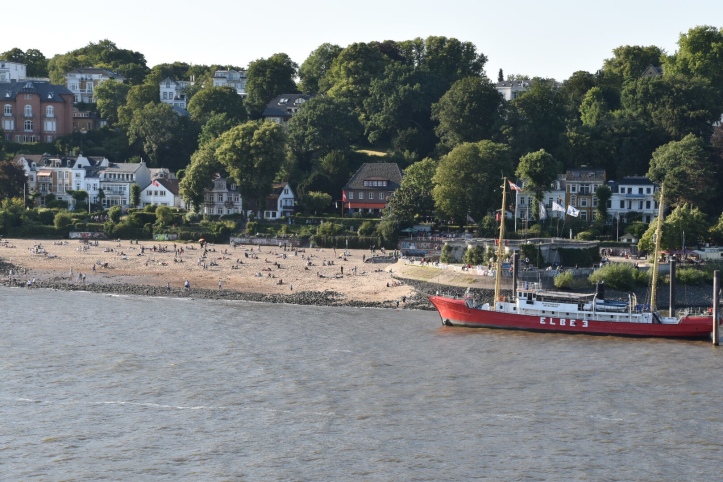 We had a great view from the Queens Grill over dinner watching the various ships passing by heading the other way up river. M had a Mediterranean Crevette cocktail followed by Fillet of beef, and J had an Asian chicken broth followed by Shrimps Provençal. Desert was a delicious raspberry shortbread concoction.

By the time we had returned to our suite we were just re-entering the North Sea as the sunset behind the mass of wind farms. Tomorrow is a sea day enroute to Copenhagen.