Our first full day onboard Cunard’s Queen Victoria is a sea day enroute to Hamburg. Overnight we had passed through the Dover Straits, and the morning found us in the North Sea hugging the Belgium, Dutch and German coastline. It was warm enough in the sun to sit on the balcony, watching the shore pass by under bright blue skies and a gentle swell giving the ship just the slightest roll.

We started with a “pre-breakfast” bowl of fruit and cappuccino delivered to our suite by our Butler, Romilo. After the kick starter, we went up to the Queens Grill for a full breakfast. J had Eggs Benedict, and M went all in with a full English (it was our first breakfast onboard after all!).

We finished breakfast in time for M to go to the two morning Cunard Insights lectures. The first one was a presentation about a smuggler from the late 1700’s, Captain James Dunn presented by Helen Doe. It was an interesting (if at times a little confusing) insight into the smuggling trade. This was followed by a talk by the Television Executive Producer Gerald W Abrams during which he talked briefly about what a producer does. Much of the session was a replay of a number of scenes from TV movies he had produced, followed by a short Q&A. Not sure I got much from it to be honest.

We met up afterwards in the gym for a quick workout – J on the running machine, and M on a bike. Having felt like we had burnt off breakfast it was time to eat again – and another good lunch it was. 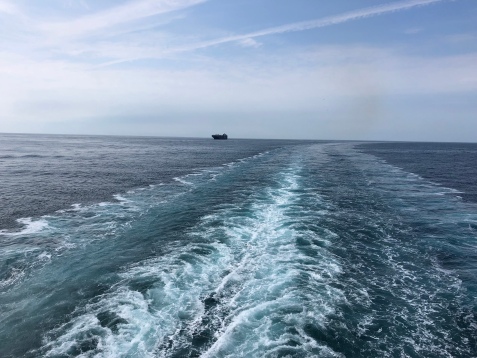 After lunch we were lucky to still have the sun on our side of the ship so sat on our balcony for a while before it was time for the World Cup quarter final between England and Sweden. Although it was being shown in the Winter Gardens lounge, The Grill’s Lounge and Golden Lion pub we chose to watch in our suite. It was an international satellite broadcast so the commentator was mainly just factual and obvious in his remarks – no sense of the excitement I’m sure the BBC commentary would have had. England won comfortably 2-0 and marched on to be semi final – what a triumph!

We went for dinner a bit later, closer to 8pm. J had caviar with all the trimming followed by Macaroni Cheese. M had a pork croquette to start followed by a very tasty fillet of turbot. This was rounded off by a Crepe Suzette made table side by head waiter Silvio.

Tonight we also had our first glass from the 1980 vintage bottle of Dows Port which we had ordered the night before. Lloyd had decanted it earlier in the day to remove the sediment and let it breathe. It was delightful and will be interesting to see how it changes after being open for a few days…..if it lasts that long. The nights are very short this time of year so it is easy to forget what time it is as you look out at a blue sky.

We had our port and a coffee in the Grills lounge which is always nice and quiet post dinner. From there we headed to the Commodore Club where we indulged in a Commodore Sir James Charles cocktail…also known as an Over the Top. It was delivered in a pressurised bottle, which is then decanted into another bottle for serving. It’s a gin based cocktail with cherry brandy, sparkly, refreshing and fun. Apparently he was known for his parties, which became more over the top as the years went on…hence the cocktail. 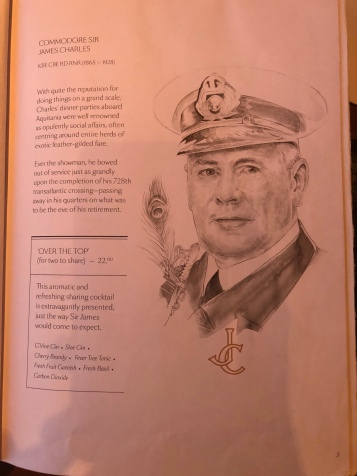 We arrived at the Hamburg pilot station to start the 80 mile transit up the Elbe to our berth (where we would arrive at 6am). As we left the Commodore Lounge we were drawn into the Yacht Club where the party band were playing dance music – where another drink and a bit of dancing ensued. A fun way to round off a sea day.

BEST DAY since the last weekend afternoon we spent here pre-lockdown 3. Be safe, be responsible and support the incredible business owners that make your neighbourhood special!!! #kensington #kensingtonchurchstreet #supportsmallbusiness #supportlocal #supportlocalbusiness #londonliving #londonlife #londonfood #londonrestaurants
So happy to be back with Chef Elsa and front of house Michael. Best Italian food in London!!!! #kensington #londonfood #londonlife #kensingtonchurchstreet #italianrestaurant #londonrestaurants #supportsmallbusiness #supportlocal
I am not a political poster, and am a very private person. However my disgust and fury has made me decide it is important to share this. I am blessed to have a very special couple in my life who are getting married this summer. Not that it should matter, but they are two women. So I was looking for some fun decorations. However my Amazon search for Mrs & Mrs was filled with Mr & Mrs results - I tried several different options. @amazon @amazonuk don’t just make claims of supporting a diverse society, take action by fixing your algorithms so that they actually return results for what is being searched for. #gaywedding #lesbianwedding #lgbt #accountable #amazon #amazonuk #practicewhatyoupreach #loveislove
Ready for our next road trip! UK vacations are just around the corner. We are all excited! #staycation #yorkshire #yorkshiredales #countryside #englishcountryside #minpin #minpinstagram #minpinsofinstagram
Can’t wait for weekend pub lunches!!! @scarsdalew8 #publunch #lifeafterlockdown #kensington #londonpubs
Spring is bursting through. Brighter days on the way #royalparks #lovelondon #springiscoming #daffodils
My Tweets