A warm and sunny day, reaching a high of 26C.

M researched options for touring St. Petersburg. Passengers on cruises don’t need a full visa, as long as they are booked on an officially recognised tour. Getting a full VISA is time consuming, expensive and a bit of a pain. We definitely wanted to do a tour for our first trip in Russia.  As we had never been to St Petersburg and didn’t know the reputable companies  we decided to do a tour organised by Cunard, “Splendour of St Petersburg”. It was only a bit more expensive then the equivalent tours with local firms and gave us greater comfort that it would meet our expectations; it was also a lot less hassle dealing with immigration, etc. We wanted to get the most out of our 2 days, so booked the tour which packed in a lot of sites.

It was an early start that we are used to on holiday – our alarm went off at 06.30 just as Queen Victoria had finished tying up to our berth in the massive cruise terminal. Celebrity Silhouette and Royal Princess were already tied up, but Arcadia followed us in and moored behind Queen Victoria. 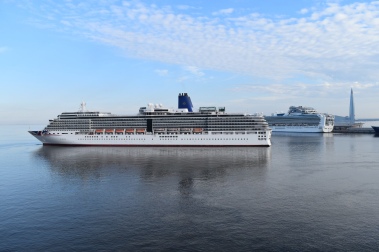 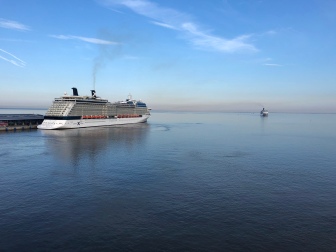 We ordered breakfast to be delivered in our suite and Romil came up trumps again, delivering it bang on 07:00 so we had time to eat before our scheduled meeting time in the Royal Court Theatre. Even though we got downstairs early, there was no waiting around, we were sent directly to customs.

Cunard had warned through various notes, briefings and entries in the daily ships schedule that we should expect delays getting ashore through the Russian immigration control. There was also an indication that the authorities would likely be quite stern and taciturn.

Despite this, we breezed through. There were young locals directing people to lines, all smiling. Although the immigration agents didn’t speak, they were pleasant and also smiled. Things went so quickly, we arrived at the buses in less than 10 minutes.

The tour guides were waiting for us outside the terminal.  Our tour had a maximum size of 14 (I think there were 13 on ours) and meant we travelled in a minibus rather than a coach (which apparently makes them more nimble to get around the city, as well as being able to adapt to changing situations). Our guide was called Dasha, and our driver Vladimir. By a fluke, we ended up in the same group as the couple from Hong Kong who sat at the table next to ours in the Grill.

Our tour group was soon  complete, and we headed away from the cruise terminal towards the city centre.  In the distance we could see the stadium where England would play Belgium later that day in the World Cup 3rd/4th place play off.

Immigration was so efficient that we had a bit of time to spare before we could enter our first destination – The Hermitage.  So we made a few photo stops enroute.  The first was next to a couple of Egyptian sphinxes on the Niva river embankment. Incredibly that these manage to hold up, despite being thousands of years old and being kept outside in a city that experiences such extremes of weather. The second was in front of the original stock exchange, and historic light houses further along the embankment.  This was a good vantage point to see The Hermitage on the opposite bank, and the Peter and Paul palace. The stock exchange (like so many buildings in St Petersburg) is being turned into a museum. 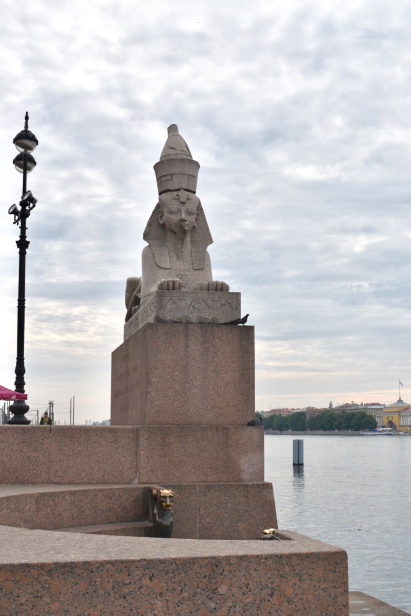 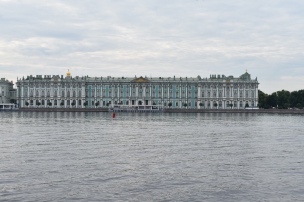 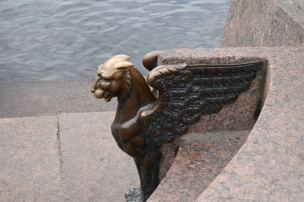 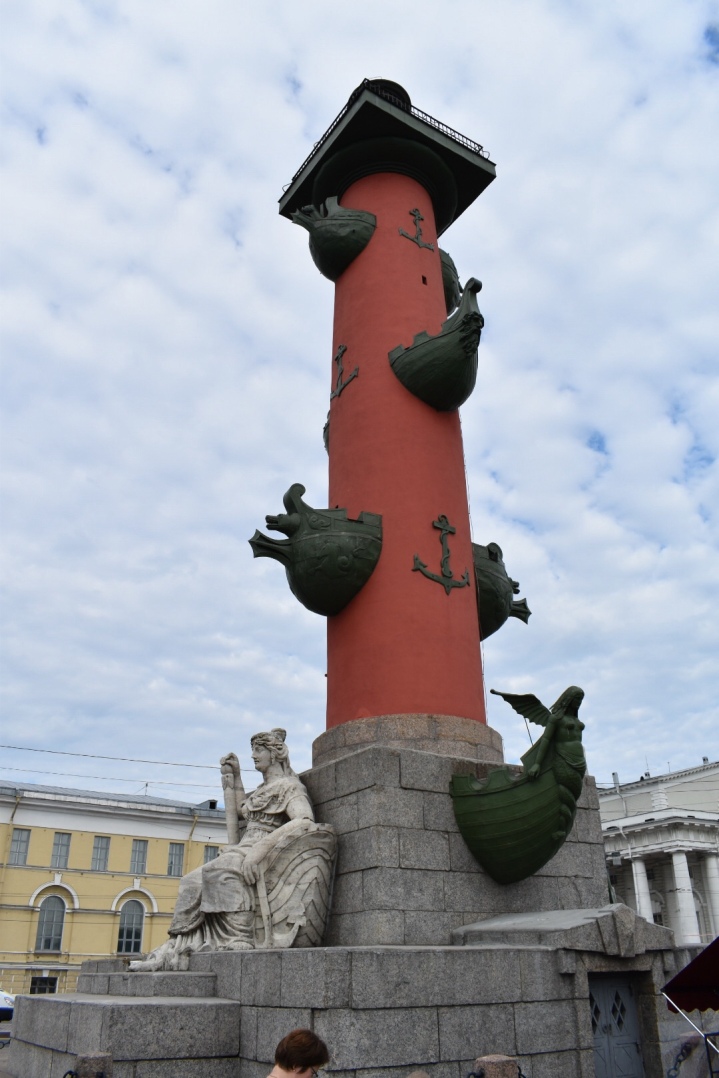 We still had a bit more time to burn (I think being Saturday the traffic was light – we experienced no delays). So we were taken to the Kazan Cathedral – the largest “in service” Orthodox Cathedral in St Petersburg which was a nice addition to the tour. The primary religion is Orthodox, and the women cover their heads with scarves in the churches. Dasha told us that people don’t sit for services, which can go on for several hours, but they do come and go throughout the service staying for as long as is meaningful for the individual. Just watching the people in the churches, seemed to indicate that there was a lot of focus given to iconography. Although close to Catholicism, Rosary beards aren’t used. 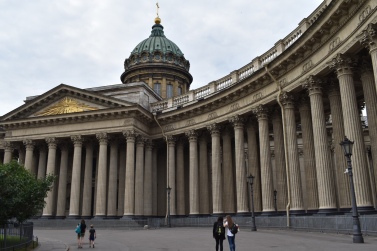 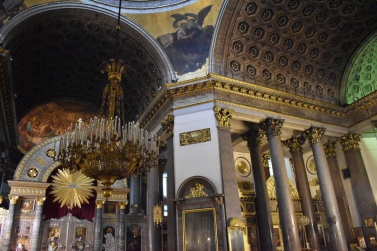 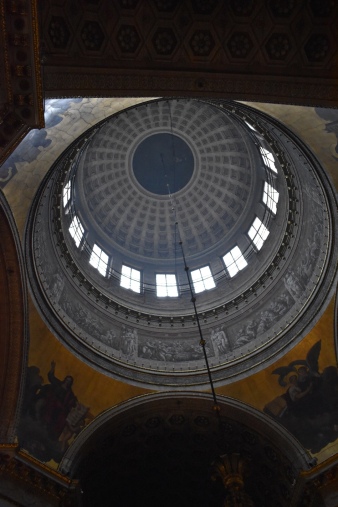 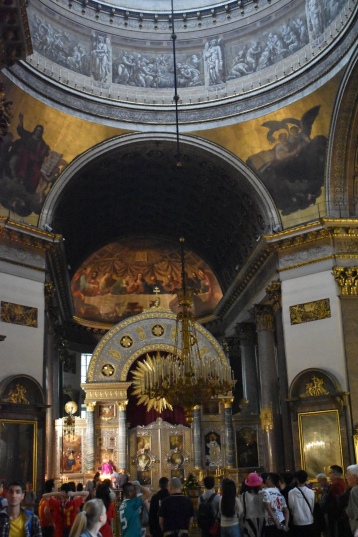 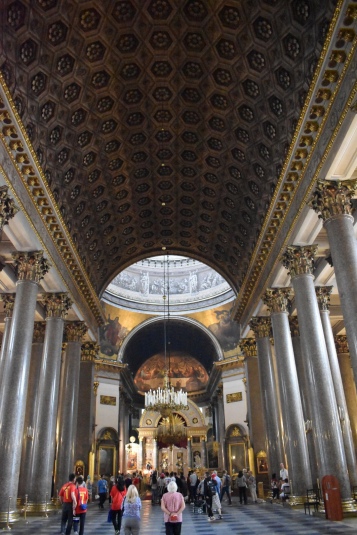 Then it was to the Hermitage.  Although only open to cruise ship tours at that time, we still had to queue a bit (not helped by a bit of mix up around where the guide was supposed to collect our tickets).  Once inside Dasha took us on a guided loop of some of the main points within the Hermitage.  It was a lot to take in – firstly because of the sheer size of the buildings which in themselves were amazing, but the quantity of master pieces, artefacts and other treasures was overwhelming. We also were on a fairly tight schedule so there wasn’t much time to slow down and spend time over areas of particular interest.  But whow….what a collection. This was the start of our on-going discussions about what we want to do when we come back independently. 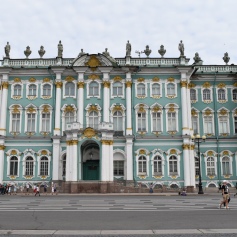 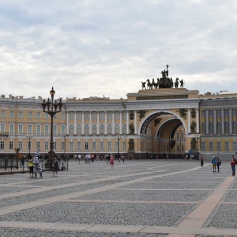 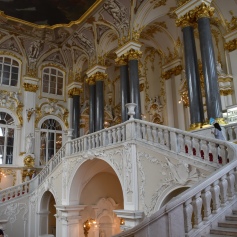 After the Hermitage we were taken for lunch at an Armenian restaurant. It is clearly a well oiled machine that the tour operators have set up as the restaurant was a large venue presumably often used for weddings and parties etc, and it seemed that all the tour groups from Cunard with lunch included met at this location. We estimated that it could seat 600+. Bearing that all in mind the food was adequate. The starter was a fresh green salad, followed by beef stroganoff and rice, and finished off with an apple-based dessert. It fulfilled a purpose without being unpleasant, the salad was particularly good. 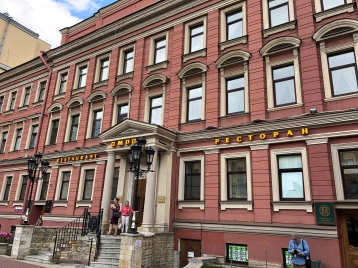 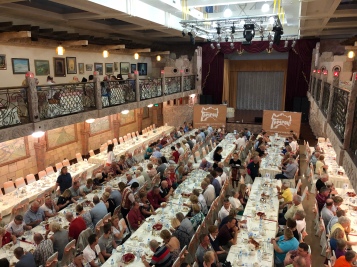 After lunch we were taken to the banks of the Neva river to join a boat cruise. This took us further upstream under a couple of elegant bridges. It was interesting to hear how all the bridges open after midnight through to 5am to allow commercial shipping to navigate the river, effectively cutting the city in two. We had views of the Hermitage and the Peter and Paul fortress before the boat entered one of the many canals to go through the city by the Summer Palace of Peter the Great and its park. There were lots of low bridges and sharp turns to navigate, and it was interesting to see the city from a different vantage point. 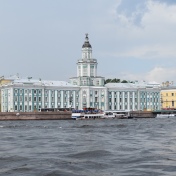 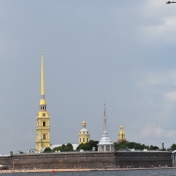 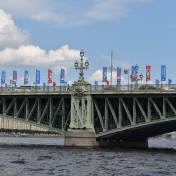 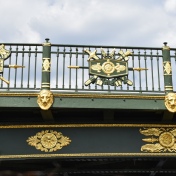 Next stop was the Yusupov Palace – where it appeared all the tour groups had arrived at once as there was a queue waiting to get into this site. We realised however, that this was inevitable given the small rooms that the tours went through in the first stages of this palace. The first part of the tour was into the basement where Rasputin had been murdered. Dasha gave the full story of this event as we slowly snaked our way though the hallways and rooms leading into the basement room where the shooting took place. After the basement we went up to the first floor which was such a contrast – a beautiful and impressive palace with many elegant and elaborate rooms. There was also a small home theatre for intimate performances. 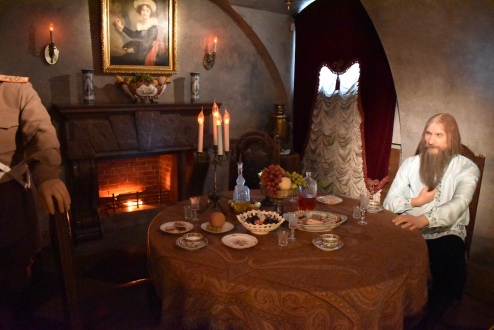 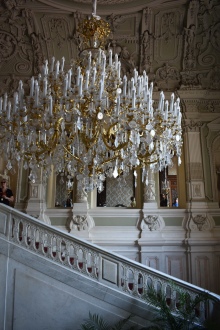 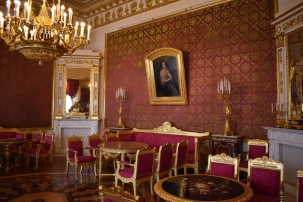 Final stop of the day was to the Russian Orthodox St Isaacs Cathedral. It’s not an active religious site today, more of a museum. Under the communists religion was banned, and between this and WW2, many of the churches (which are incredibly ornate) fell into disrepear. Some were used as storage or repurposed (one church was used to house animals) while others were simply abandoned. While religion has clearly become a part of everyday life again, no all of the churches have daily or weekly services. Many have been restored, but only have occasional services; they are predominately tourist sites. The outside is memorable for the huge golden dome which can be seen right across the city. The inside is equally impressive if not more so – the pictures probably don’t do justice to the size and grandeur of it. 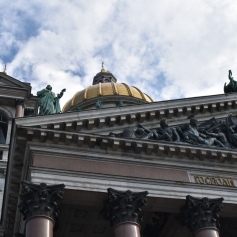 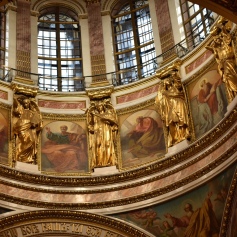 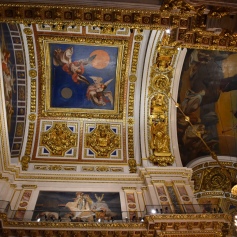 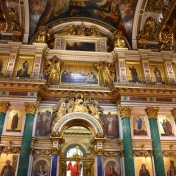 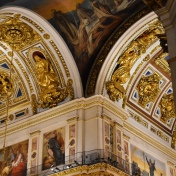 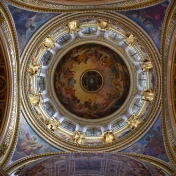 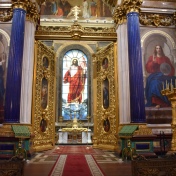 After that we headed back to the ship at 5pm, exhausted. As we write this, it seems odd to think of how tired we were, but you can’t underestimate how much walking and standing there was. England were playing at the stadium not too far away, but the satellite reception onboard was quite poor – just as well they weren’t in the final or there would have been a lot of disgruntled passengers!

We forced ourselves to go up to the Queens Grill for supper. Our choices tonight were: J – Beef Consomme followed by prawn tempura; M – Crab Scotch Egg, followed by Cote de Boeuf, finished off with a Grand Marnier Souffle & Sauce Anglais (custard!). Before retiring for the night we had yet another glorious sunset as the sun disappeared over the distant Baltic horizon.