When M awoke we were sailing up the Kiel Fjord – although formed by Glacial ice, it apparently is not formed in the same way as the Fjords of Norway, but the name is used for several inlets in this area of the Baltic coast line.   We passed by the entrance to the Kiel canal which connects through to the North sea and saves 250 miles on the journey we would have to make around Denmark over the next 2 days. 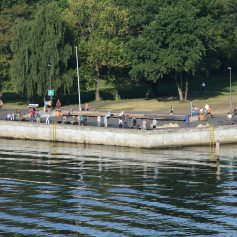 This was a maiden visit for Cunard’s Queen Victoria to Kiel (although the Queen Elizabeth has previously visited so not a Cunard maiden).  Obviously Cunard and the local authorities wanted to make a splash, and as well as a water fountain salute from an accompanying tug, the captain came over the address system and advised there may be drones taking video footage and cameras ashore.  M did see a drone circling and you can see the video footage on Youtube below (see also the pirouetting tug towards the end!).  Queen Victoria also woke the town up with some long blasts of her whistles.

As well as the arrival celebrations Cunard had set up a Queens Village on the quayside where there was an official reception, and later the opportunity for passers by to indulge in a Cunard signature cream tea in the warm sunshine.

There was a minor hitch on arrival – they were clearly not prepared for the number of people disembarking that morning.  Kiel was being used as a change over port for quite a lot of passengers (we estimate approx 600, so nearly a 3rd of the ship).  Most of the passengers passengers (mainly German, but other nationalities too) disembarking in Kiel who had joined in Hamburg to do the Baltic portion of the cruise (other passengers who had done the previous Iceland cruise had departed at this point, although we did meet some passengers who had done Iceland and were staying on to do the Baltic).  What we can’t figure out is why the German immigration team would only have had 1 person in place for a vessel of this size. Had people not been leaving the ship to go home, they would have been leaving to go on tours or explore the town – so either way, there would have been the same number of people disembarking. With only 1 person on immigration, a very long queue quickly built up on the terminal walkway and the Captain asked that anyone who could delay their disembarkation should do so while they sorted out the situation.

So we waited to go ashore until later in the morning when the queue had died down (non-existent at that point). The immigration officer did however look through every page of J’s US passport before stamping it, so obviously doing it by the rule book. Given how much she travels for work – this took a few minutes! 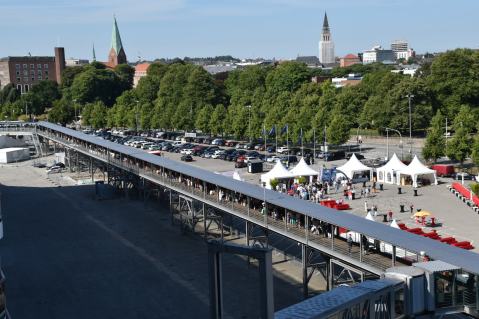 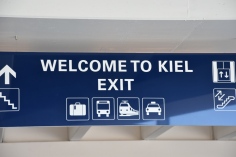 Once out of the terminal we were handed a map by the local tourist office guides (who have been ever present at most of our ports on this tour to provide some guidance). It suggested following a blue line which was on the map, but also painted on the pavement, which would take us through the town.  It wasn’t a particularly inspiring town – obviously heavily destroyed during WWII  – and it was rather bland, but pleasant enough as a town. There were certainly lots of travellers passing through the town – not only were there 2 cruise ships in port, but its also a busy ferry terminal with ferries to Gothenburg and Copenhagen. We were even drawn into the station for some inspiration when M saw some sails hanging from the roof inside, but didnt turn out to be that memorable. 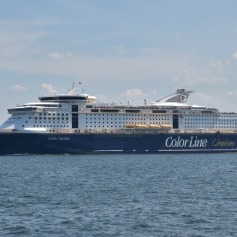 We did however find a post office to post some postcards. We walked through the town, and back again in not more than an hour….in time for lunch onboard!

J had a “Hearts of Palm and Serrano Ham with Bell pepper vinaigrette” salad, whilst M had a tasty Steak and Mushroom pie (with the most enormous crust).

After lunch, M took another walk ashore, and decided to walk in the opposite direction along the embankment of the Fjord.  He walked for probably 2 miles along a nice promenade with many marinas with fancy yachts tied up (Kiel is the yachting centre in Germany).  There were several pontoons which the young locals had taken over as sunbathing decks and diving points…..Im not sure how warm the water would have been, but it was turning into a warm afternoon and a dip would probably have been refreshing.  There were also several very nice looking mansions & apartment blocks overlooking the water, and some cafes/restaurants.  Again – pleasant enough. 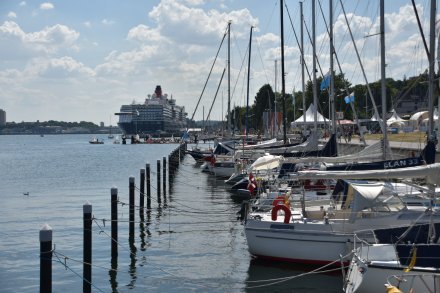 It did however offer some photo opportunities of the Queen Victoria tied up alongside the quay as he walked back to the ship. 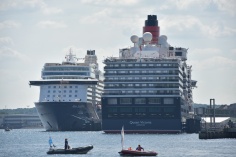 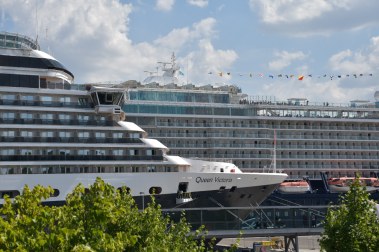 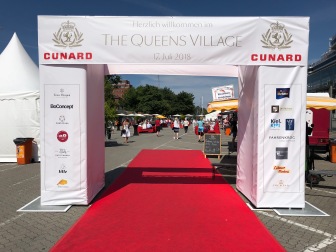 We had another beautiful sail away, leaving at 5pm and making our way out of the harbour & Fjord to the Baltic.  Queen Victoria again made herself heard with the ship Whistles being sounded several times as we turned & headed out.  The wind was non existent and the sea so flat. We had a water skier follow us for some distance out – him only falling off a couple of times. 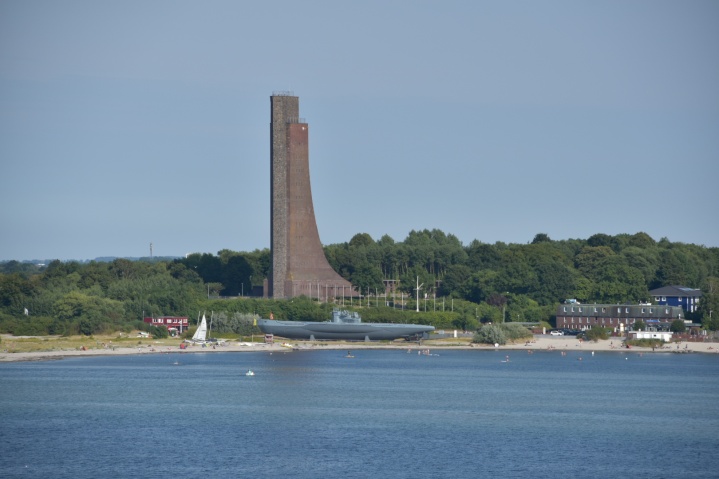 Another video was taken by another drone that captured the maiden departure as Queen Victoria completed the 180 degree turn and headed out of Kiel:

Dinner tonight was another good affair.  J ordered Lobster Bisque, followed by Salmon Tartare,  whilst M started with the Salmon Tartar, followed by a delicious Chateaubriand prepared by Savio the Head waiter table side.  The sun set out of the window as we dined.  We took our Port and Cheese into the Grills lounge after dinner, and had coffee/Mint tea there. 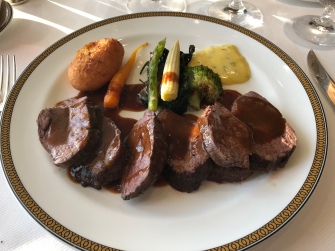 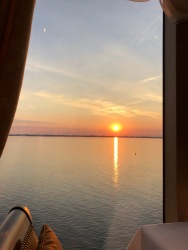 We were approaching the Great Belt bridge which links two Danish islands and forms part of the road connection from mainland Europe to Scandinavia.  The Princess cruise line’s Regal Princess passed under the bridge in the opposite direction just prior to us. It was such a still night the sea was flat calm and you could hear the noise emanating from the other ship.  As we passed under the bridge (under which Queen Victoria had a clearance of just around 10 metres) there was a cheer from the vast number of passengers who had come up on deck to see our transit (our transit in the opposite direction the previous week was at 3am in the morning). 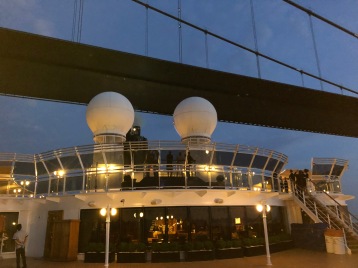 That rounded off our day and we retired to our suite once safely past the bridge.

Tomorrow is our final port of call – Gothenburg in Sweden.

BEST DAY since the last weekend afternoon we spent here pre-lockdown 3. Be safe, be responsible and support the incredible business owners that make your neighbourhood special!!! #kensington #kensingtonchurchstreet #supportsmallbusiness #supportlocal #supportlocalbusiness #londonliving #londonlife #londonfood #londonrestaurants
So happy to be back with Chef Elsa and front of house Michael. Best Italian food in London!!!! #kensington #londonfood #londonlife #kensingtonchurchstreet #italianrestaurant #londonrestaurants #supportsmallbusiness #supportlocal
I am not a political poster, and am a very private person. However my disgust and fury has made me decide it is important to share this. I am blessed to have a very special couple in my life who are getting married this summer. Not that it should matter, but they are two women. So I was looking for some fun decorations. However my Amazon search for Mrs & Mrs was filled with Mr & Mrs results - I tried several different options. @amazon @amazonuk don’t just make claims of supporting a diverse society, take action by fixing your algorithms so that they actually return results for what is being searched for. #gaywedding #lesbianwedding #lgbt #accountable #amazon #amazonuk #practicewhatyoupreach #loveislove
Ready for our next road trip! UK vacations are just around the corner. We are all excited! #staycation #yorkshire #yorkshiredales #countryside #englishcountryside #minpin #minpinstagram #minpinsofinstagram
Can’t wait for weekend pub lunches!!! @scarsdalew8 #publunch #lifeafterlockdown #kensington #londonpubs
Spring is bursting through. Brighter days on the way #royalparks #lovelondon #springiscoming #daffodils
My Tweets