We were very lucky to be given a voucher for a boat trip around Poole Harbour as a gift, but we had stagnated on actually booking our trip.  With time running out we chose the late May bank holiday weekend to make a day trip to the coast. And did we luck out – the weather was stunning.

After a painless drive down from London, we arrived in time for lunch. We may have been able to find somewhere better, but as we passed The Jolly Sailor there was a spare table in the sun, so thats where we ended up to enjoy a healthy portion of Fish and Chips (and for me a pint of local ale to wash it down).  Maybe not the best Fish and Chips we have had, but pleasant all the same.

After lunch we still had some time before our boat trip so we took a walk along the quayside and through the local town.  Poole is where Sunseeker make their luxury motor yachts – with several all on display being fitted out in their boat yard….any of which would be perfect to have – but even the smallest are probably a few million over our price range!  Still, its always nice to dream. 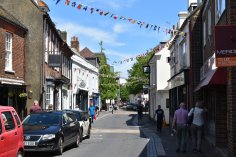 The town was quite pleasant, and the small high street had a nice range of shops, with several restaurants and hotels – good for future reference if we want a weekend by the sea.  Along the quayside there were a vast number of families with crab nets which the children were dangling over the quay edge into the water below – they all seemed to be rather successful as there were a number of crabs in buckets beside them. Hopefully they all got released back into the water at the end of the day.

It was then time to board our boat – the City Cruises Island Scene, which was you typical coastal pleasure boat. Because it only goes round the harbour, it was smaller than the ones which you can take further along the Dorset coast.

Poole Harbour is a large natural harbour created during the Ice age.  Its the largest natural harbour in the UK. Its also mostly very shallow – averaging around 0.5 metres.  When we drove into Poole we came along the waters edge and there were lots of people (and dogs) wading along way out with water only up to their knees. Its also a great spot to learn surfboarding because of that. It does however have a commercial port, and a deep water channel leading out to the sea. 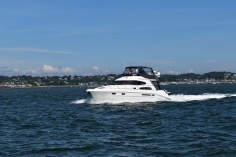 Our tour took us past Brownsea Island which is in the middle of the Harbour. Now owned national trust site, it is the “famous” for being the birth place of the Scout movement, as well as one of the few places in England where indigenous red squirrels survive.

We also went past Sandbanks – a spit that forms the harbour entrance, but is also famed for being the fourth most expensive land value by area in the world behind London, Manhattan and Tokyo.  From the commentary on the boat it seems its a favourite haunt of premier league football managers and various other celebrities – all of which I guess helps keep the value up. 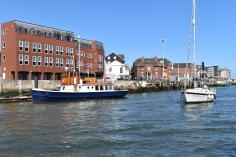 We returned back to Poole quayside, and after a refreshing ice-cream in the afternoon sun we made our way back towards London via the New Forest.